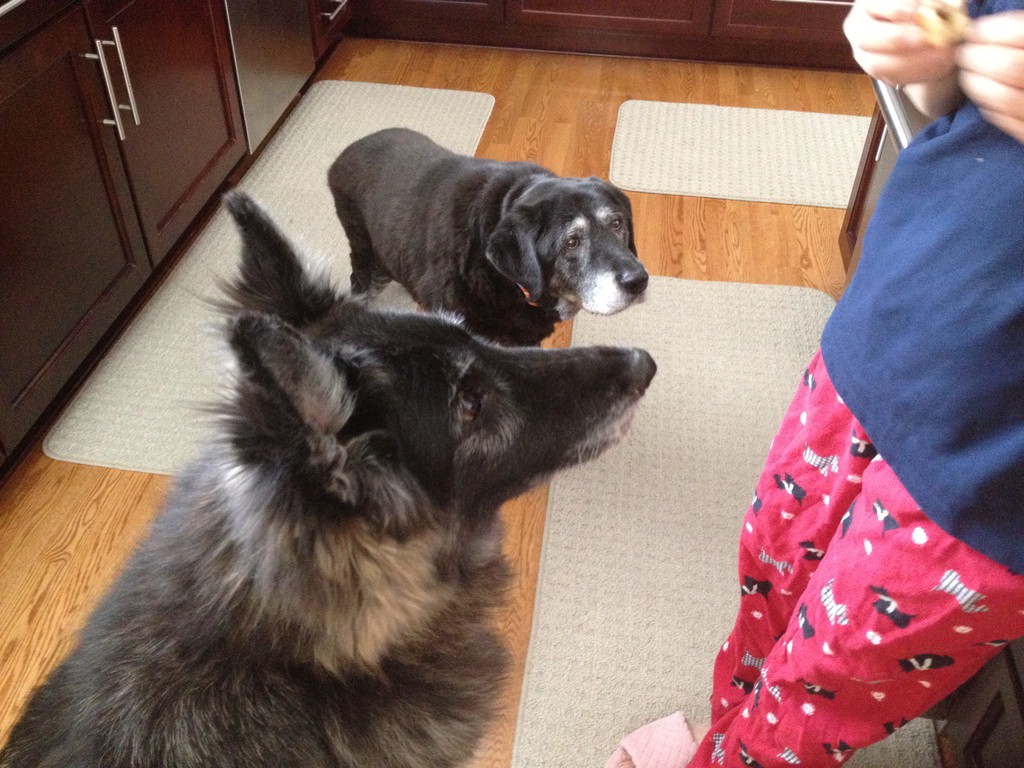 This photo is from Penny’s fifteenth birthday lunch with her sister Casey, during Summer of this year. Penny is our black Labrador Retriever in back. Casey, our German Shepherd, is in front.

That’s my wife at the right feeding them an entire In-N-Out hamburger. We wanted to make sure Penny got to eat one of those before becoming too old and feeble. The focused anticipation in both of their eyes meant we chose the perfect gift.

Casey would have been 10 years old today. She was a Christmas puppy, even though she didn’t become ours until over a month later.

And she was the perfect gift too. She kept on giving and giving. So much energy. So much hair. So much love of life—hers and ours.

I used to say that she had a 110-volt brain in a 220-volt body. Overloaded, she leapt first and sniffed second. Racing everywhere. She could easily knock me over with her enthusiasm. There are still divots in the walls from our play time.

My wife called her our “fluffy bunny.” She was the furriest German Shepherd I’ve ever known. And she would shed a lesser dog every week to fill our central vacuum cleaner. But burying your hand in the mane on her back was truly a simple and visceral pleasure.

Outside on a walk, she was certain my wife needed protection from all other people, animals, plants—anything that moved or stirred in the breeze. Noises could change her into an aggressive lioness protecting her pack.

Inside, she was a lamb. She was gentle and loved it when people visited—once she got used to them coming through the door. She took particular delight in children. And she would lay at your feet or lick your hand even if she just met you.

She was a precious nuisance. But she was ours. She was family.

A few months ago, something went wrong inside that big, crazy body of hers. We still don’t understand it all. She lost her desire and her will to eat. She got thinner and weaker, eventually unable to stand on her own. Less than a week after Thanksgiving Day, it was becoming too much for her and us. We had a decision to make.

With all of us gathered around her, and her head resting on my knee, she passed away from this world and through our tears and sorrow. It still hurts so much to miss her. But that’s how we know she mattered.

Now her ashes rest in a little box on the mantle above our hearth. But she’s always near us anyway. In our thoughts. In our hearts.

Hello, I’m Don Melton, and I started
the Safari and WebKit projects at Apple.
These days I’m just an aspiring writer
and recovering programmer.